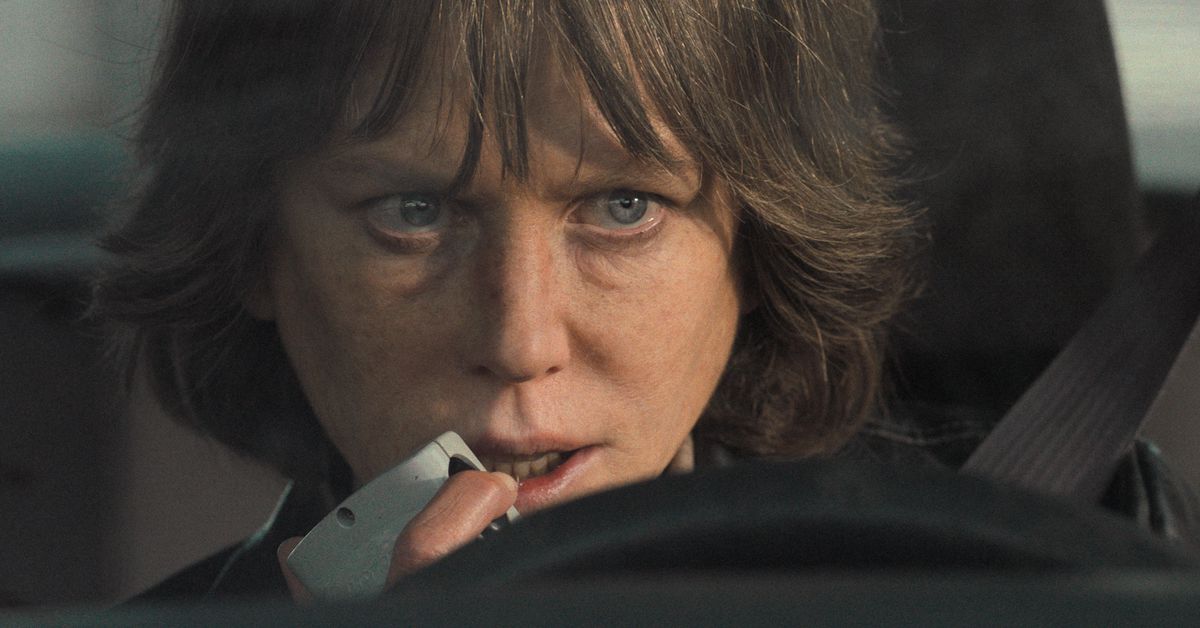 Karyn Kusama, maybe more than most filmmakers working today, is aware of how the film industry squeezes its workforce into neatly categorized boxes. She was the “promising up-and-comer,” following her directorial debut Girlfight; she spent time in “director’s jail” after back-to-back misses with Aeon Flux and Jennifer’s Body (the latter of which has since become reappraised as a cult classic; Kusama broke out with 2015’s The Invitation, a slow-burn thriller that earned her a new tag: “horror director.”

Kusama’s latest is Destroyer, an Los Angeles-set neo-noir anchored by Nicole Kidman, who disappears into the role of Erin Bell, a hard-living, self-hating detective still haunted by a decades-old case gone wrong. Only Kusama’s made a career out of resisting that industry penchant for distilling its narratives into familiar, easily-digestible bits, preferring to carve out space for protagonists that don’t normally see their stories told on screen. Stories like Erin Bell’s in Destroyer.

With Destroyer now in theaters (and slowly rolling out to more locations), Polygon spoke to Kusama about what she’s learned through the ups and downs of her career, the symmetry between her latest feature and her directorial debut Girlfight, and whether or not she considers herself a “horror director.”

Polygon: What was the appeal of subverting the noir trope of the self-destructive anti-hero? In noir, it’s a role so often reserved for men.

Karyn Kusama: I guess I sort of resist the notion that Erin isn’t her own very specific character and very uniquely drawn woman. When I think about self-destructive anti-heroes often being played by men, on the one hand, that may be true. But on the other hand, I also wish I saw more complicated roles for men. I hesitate to say that men get all the complexity, because I don’t see quite enough of it in them on-screen either. So, I certainly feel like the complexity of the character on the page was really attractive, and super, super interesting. And something I really wanted to dive into.

Why do you think we don’t see more complexity in characters, whether male or female?

Kusama: I think audiences can take it. I certainly think they can handle it. But I wonder if there’s a resistance to pulling audiences in multiple directions, and creating complicated relationships with characters because you run the risk of losing people. I think we have this idea that there’s value in uniformity. I actually don’t believe that. I see much more value in this concept of complexity that we’re talking about. But I think there’s a certain degree of simplicity that we want from our stories and if you introduce characters who challenge that simplicity, or just create a somewhat bumpier ride in a way, you’re in danger of either losing audience members, or losing the faith of the people you’re making the movie for. Which can happen sometimes.

You’ve spoken in the past about the importance of maintaining creative control on your projects. How important was maintaining that for you on Destroyer?

Kusama: It was crucial. I feel like what I’ve come to understand is that, for me, being given final cut — which is a nod toward a sense of creative authority — actually makes me a better listener. I can listen to all kinds of ideas without thinking about who is offering the idea, and just hear the idea. In some respects, I think I become a better collaborator by being a “final-cut” director. And so I’m trying to just figure out ways to replicate that situation. Because it’s just a better way for me to work.

It’s been 18 years between Girlfight and Destroyer for you, and 17 years have passed between the flashbacks and present day Erin’s story. She goes from naïve and hopeful to aggressively jaded. How much were you able to identify with Erin’s character arc? Is that something you need to be able to do in order to make a movie about a character?

Kusama: I think it’s important that you feel like you understand a character, and I have felt very empathetic to [Erin’s] plight. You know, it’s really interesting that you bring up Girlfight, because in the past couple of weeks, I’ve been realizing that Destroyer — of all my work — is probably most related to Girlfight. “Full circle” isn’t quite the right metaphor, but there is a symmetry in certain aspects, in terms of the characters’ fury and inability to reconcile that fury positively into daily life. So in some ways, I think the two films are really related, because one imagines a somewhat constructive re-evaluation of one’s own rage, in Girlfight, versus something like Destroyer, which imagines the effect of rage going unanswered or unaccounted for. And what that does to destroy the body and the soul.

How do you think your journey in between those movies helped prepare you to make this one?

Kusama: I’ve definitely experienced a sense of profound failure, personal and creative shame, and a sense of somehow failing myself. All of that has also been happily complicated by moments of success and achievement and moments of making things I’m very proud of. I think what’s happened is I’ve just matured a lot over time. And I think I have a somewhat more … sober mind about all of it, in terms of how I approach this business.

Making movies is very tricky and very difficult to do. Particularly if you’re angling for a certain outcome. And I think once I could fully abandon the desire to control the outcome — I mean, I’m not 100 percent there, but I’m working on it — it makes my life a lot easier, and allows me to just focus on making films that I want to make, the way I want to make them, with the people I want to make them with. So that has sort of opened up new avenues to me. That process of maturity. But, you know, it’s an ongoing one. I certainly don’t want to jinx myself, but I imagine there’s plenty of heartbreak coming up for me. But I’m hopeful that as I get a little bit older, I also get a little bit wiser.

How has the film landscape changed during that time, in your experience?

Kusama: For filmmakers, what is challenging is that we are now living in an era where things as simple as the theatrical release are a more rarefied experience. And in some respects, a more imperiled experience. The idea that not all movies will end up on the big screen, should end up on the big screen, all of that is really a new kind of conversation to be having. So I would say that what has changed in the landscape — and made it both more difficult and more exciting — is that it’s really important to understand the story you’re telling, and the way in which you want people to experience it. I feel like there are really great opportunities to be experiencing stories in a long-form, on television, and, I hope, cinematic experiences that keep us going to the theater. To watch those singular feature experiences that just aren’t the same in your living room.

Does it matter to you how your movies are being seen? Whether it’s at the movie theater or at home?

Kusama: Yeah, it does. I want to say, “Oh, however anybody discovers them, that’s great.” I want to be that person, but I’m not. [Laughs] I want people to see it on the big screen, with pristine picture and pristine sound, and it just almost never really happens that way. So I just have to be open to the fact that people will experience the movie in a multitude of ways.

There seems to be this industry perception, as well as among the general public, that you are a “horror director.” What’s your take on that?

Kusama: It’s funny, you make two horror movies, or movies that could be construed as horror, and now you’re called a horror director. I think it’s just that overwhelming desire for society to organize itself around labels and categories. [Laughs] I don’t actively resist being called a horror director, because I do love elements of horror. I think that is pretty clear. But I definitely think it’s strange that there’s this insistence on reducing me, or anyone, to doing one thing. There are so many kinds of stories I want to explore that, I think, are about investigating our limited capacity for change. How we work with that challenge. And if that gets expressed through horror, so be it. But certainly, I think genre as a whole remains an interesting place to work, because it’s a transporter of so many ideas and themes and metaphors, within more familiar storylines.

What kinds of stories grab you, then?

Kusama: I’m not interested in, for the most part, stories about kings and queens and captains of industry. Official power doesn’t really engage me. Probably because most often, what we’ve come to realize is that official power gets corrupted or abused. I’m more interested in the ways that we attempt to find our own self-hood, identify our own place in the world. Sometimes that’s a really lonely process. I’ve definitely been attuned to characters who I think carry some kind of essential loneliness, or a somewhat nihilistic or despairing view of the world.

But, all that being said, I guess I’m trying to figure out how to make room for hope in all of this. And hope not as a kind of wish fulfillment, but a sense of genuine attention paid to the unexpected kindnesses and the surprising compassion that we can encounter, even among the most corrupt of humans. So I’m probably just trying to understand how we get past our own personal regret, shame, corruption. Because it starts on an individual level long before it becomes institutional.

You see that in Destroyer. There’s hope in the end.

Kusama: I’m glad to hear that. Some people I think experience the movie as not so hopeful, but I experience it as hopeful.

About the Author: polygon